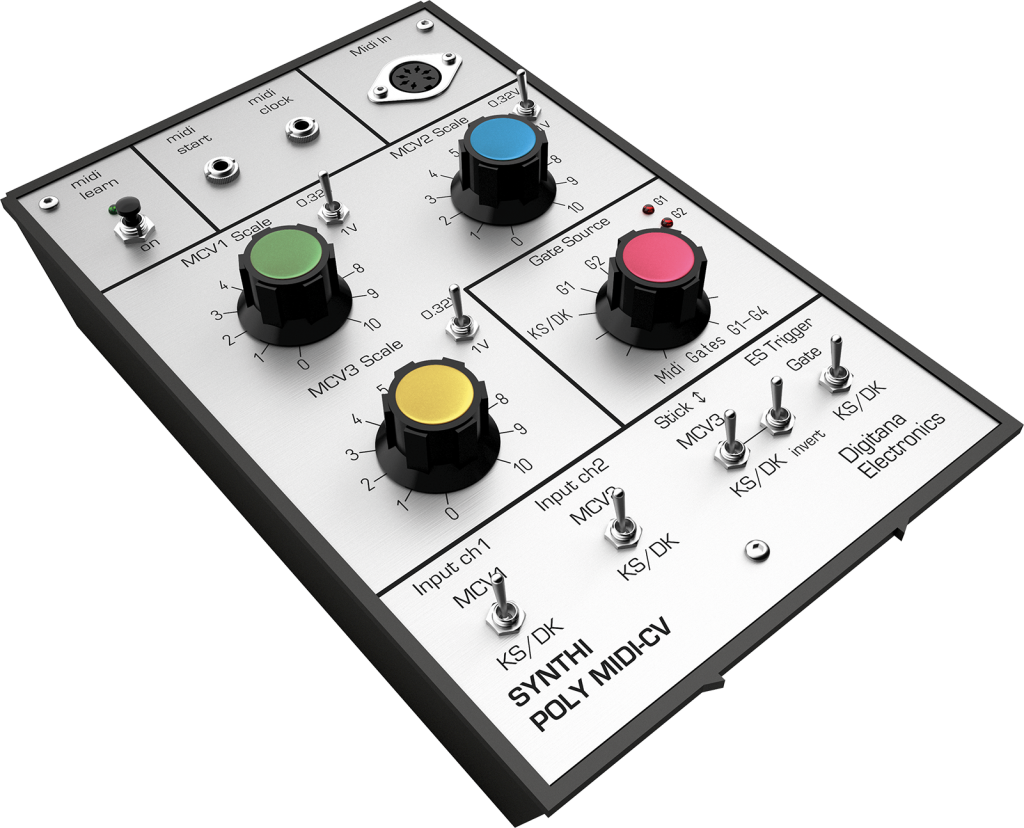 The Poly MIDI-CV interface is a custom designed multi-channel MIDI-CV module for use with a Synthi AKS. It is based around Marc Bareille’s fantastic multi-channel PIC micro controller based MIDI-CV converter called the ‘MCV876’. 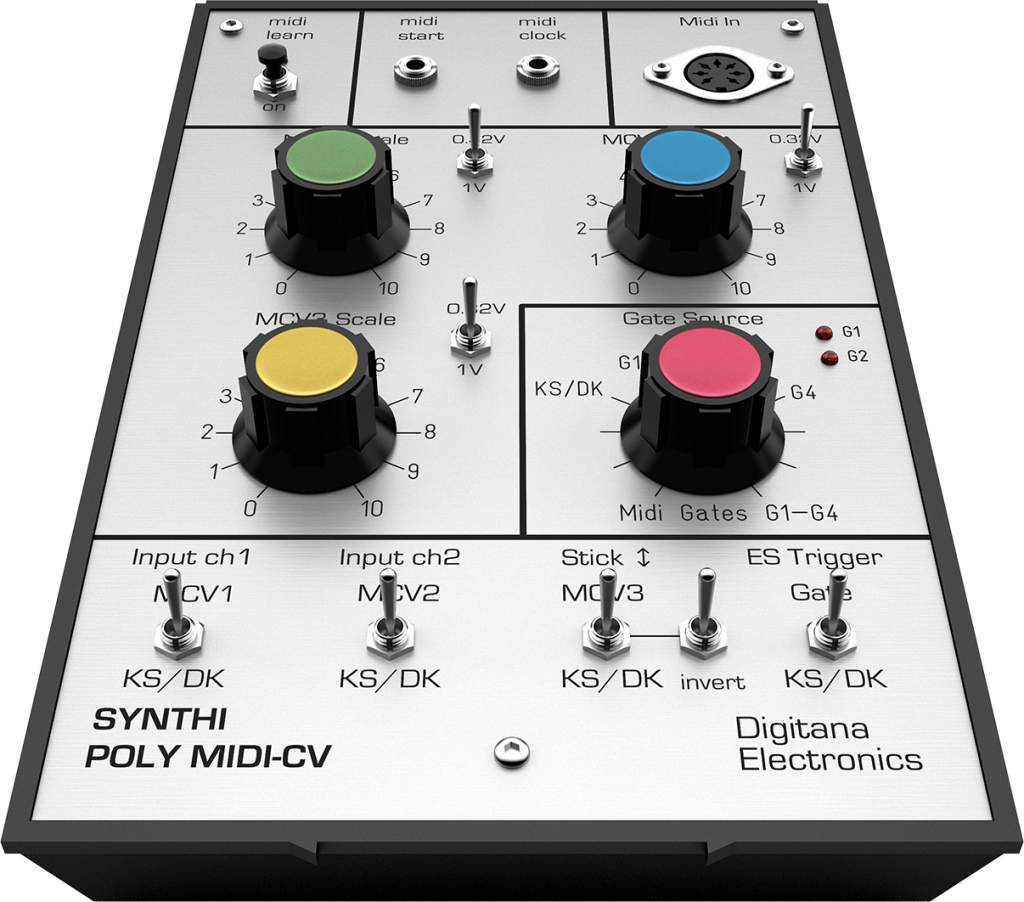 The units come with the latest firmware programmed into the onboard micro controller (PIC182320). It supports both mono and polyphonic play modes. Marc has created a simple Windows software interface that allows the interface to be configured in different ‘play modes’ and thus offer different functionalities, all via MIDI SysEx. In addition to this, custom playmode ‘preset’ SysEx files are available which can place the interface into different playmodes in a live situation via MIDI upload. This avoids the need to use the Windows configuration software.

Control voltages CV1 to CV3 is relevant for the Synthi Poly MIDI-CV. CV1 to CV4 are available for the four channel Synthi AKS Quad MIDI-CV Interface seen elsewhere on this website.

Gate5 and Gate6 outputs are via 6.35mm jack sockets and offer MIDI start/stop and MIDI clock signals for interfacing/synchronising with other external MIDI devices.

There are three front panel level pots for CV1 to CV3. Also there are three toggle switches that can flip the scaling between 0.32V/octave (standard Synthi oscillator scaling) or 1V/octave when pots are set to max level (10). The 1V/octave option is useful if a CV channel is being used as a modulation source rather than give pitch control of a Synthi oscillator pitch. 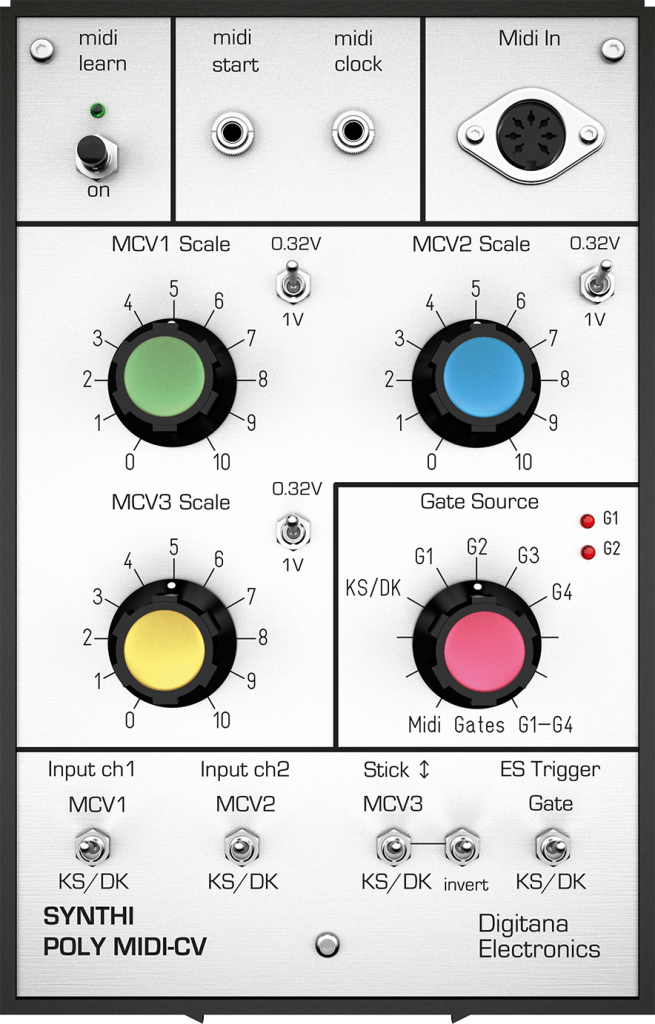 Toggle switches allow independent switching of KS control or MIDI-CV control of each of the three independent CV input channels of the AKS matrix (Input Ch 1, Input Ch 2, and row 16 of the matrix). So it is possible, for example, to run KS controlled pitch sequences via matrix row 16 and MIDI generated pitch sequences via CV1 and CV2 — controlling oscillator 1/oscillator 2 pitch in Poly2 mode and gate controlled via KS or Gate 1 or 2. There is also the option to invert CV3 or the KS CV source into row 16 of the matrix via another toggle switch, again adding to the creative possibilities.

It could also be used in a single Synthi AKS controller unit… with three of the four channels being used to inject CV1 to CV3 into the matrix (Input Ch 1, Input Ch 2 and row 16 of the matrix) and the fourth channel used to offer novel triggering modes of the ES.

The interface derives its power from the Synthi AKS and is about 100 milliamps mainly from the +12V side of the power rail.

The unit will of course work with the VCS3 (Mk2) and DK1/2… but we offer a special version for the VCS3, in an Afroromosia hardwood case, to match the VCS3 styling. Please see VCS3 Poly MIDI-CV elsewhere on this site.