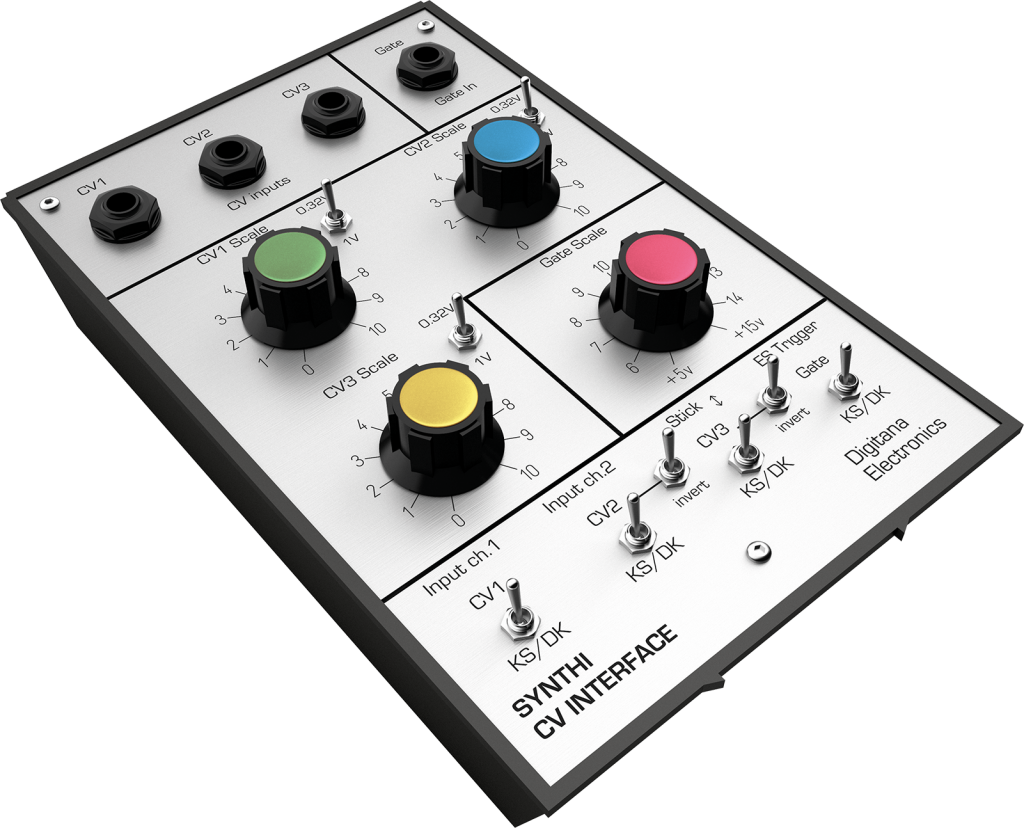 Built into a retro-looking trapezoidal shaped plastic case which matches the texture of the AKS Spartanite attaché case quite well. Different coloured knobs will be an option. Knobs, jack sockets, dials etc. are all identical to EMS originals. Panel layout is in keeping with the wonderful styling of the Synthi AKS.

The Synthi AKS CV Interface unit allows individual switching of the four channels (Input Ch 1, Input Ch 2, matrix row 16 (joystick vertical control) and gate) between either external CV sources (CV1 to CV3), external gate source or the CV and gate from the Keyboard (KS) of the AKS. The unit has two voltage inverters. The first allows inversion of CV3. The reason why I added the invert option is because the Synthi AKS (and VCS3) all require negative pitch voltages to control oscillation frequencies via Input Ch 1/2. This is because these channels actually invert any signal passed into them. For proper pitch control of oscillators when using the CV3 channel, it is necessary to invert CV3. ‘Proper’ control means increasing positive CV3 to give increasing oscillation frequency. Flicking the CV3 invert switch off (so CV3 is no longer inverted) gives the opposite control whereby more positive CV3 pitch voltages give lower frequency oscillation pitch. A bit like a backwards keyboard! This setting is still very useful for producing weird effects or if you want to use CV3 to control things like filter frequency etc. 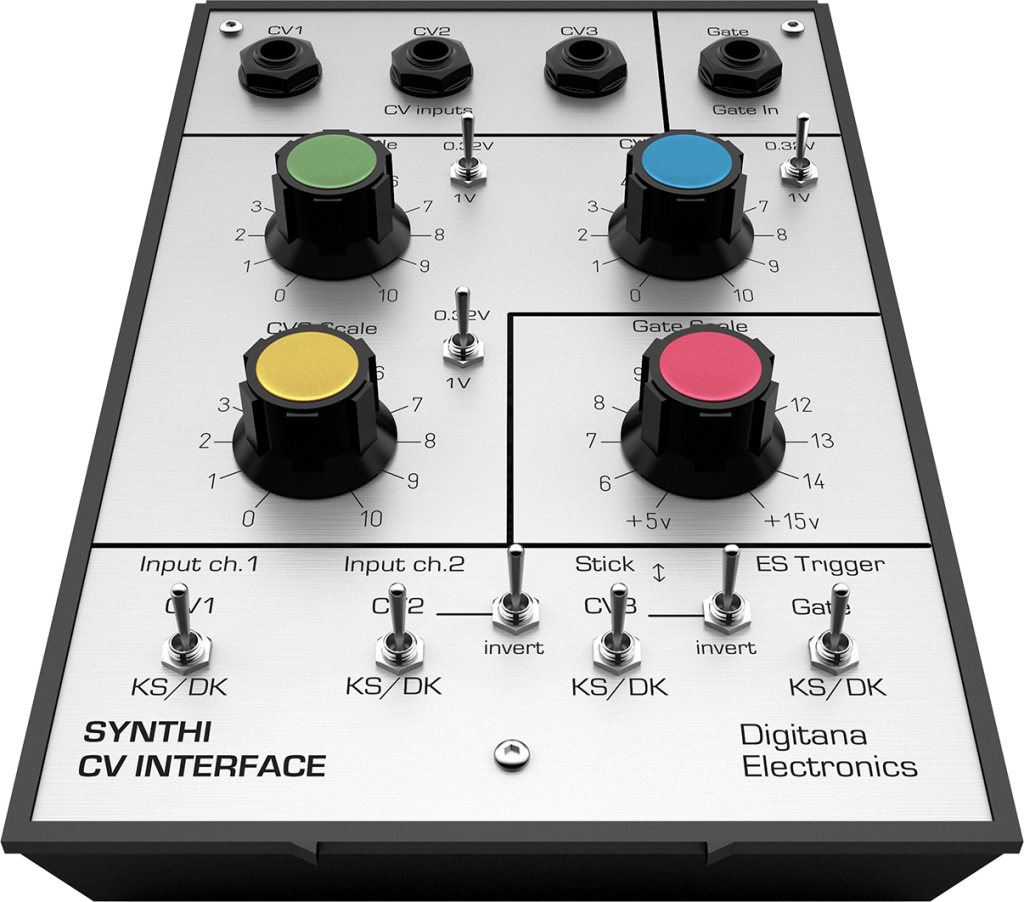 The second inverter acts on Input Ch 2 voltages from the AKS keyboard (called ‘KS Invert’ on the front panel). This allows inversion of the trapezoidal dynamic envelope that the keyboard of the AKS generates via Input Ch 2 when the keyboard is played. It’s useful when using this keyboard generated envelope to modulate things other than output channel levels.

The power for the unit is taken from the Synthi itself via the jones socket and is very minimal since it’s just a few milliamps that are needed for the opamp voltage inverters. 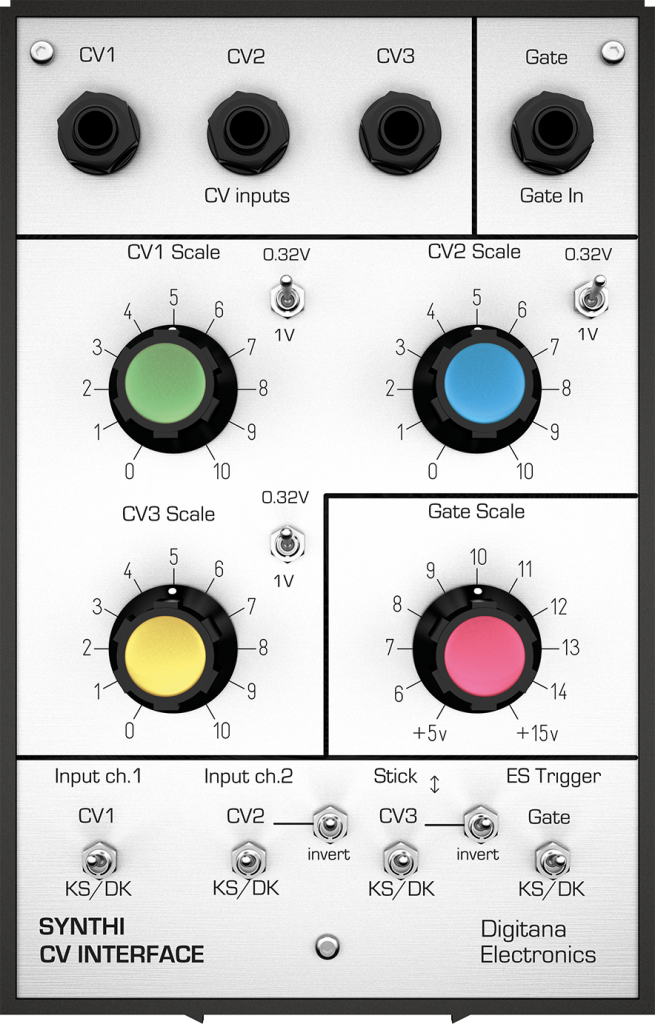 an example of how this unit can be used

You could have the AKS sequencer send pitch sequences via CV3, controlling, for example, oscillator 1 via row 16 of the matrix. Another sequencer or the AKS keyboard could send pitch to CV1 which could, for example, control oscillator 2 via Input Ch1 and finally have either the AKS or external CV2 control filters etc. via dynamic envelopes. The triggering of the Envelope Shaper (ES Trigger) could either be via an external gate source or the AKS sequencer.

Of course there are other creative combinations which you can come up with!

A special version is available for use with a Synthi A, because the Synthi A (as a Mk1 unit) does not have the feature where row 16 of the matrix can double as either a joystick vertical control or a CV input. The Synthi AKS (and VCS3 Mk2) have this feature. So for the Synthi A, a special pin cable has been designed to carry CV3 to the matrix.