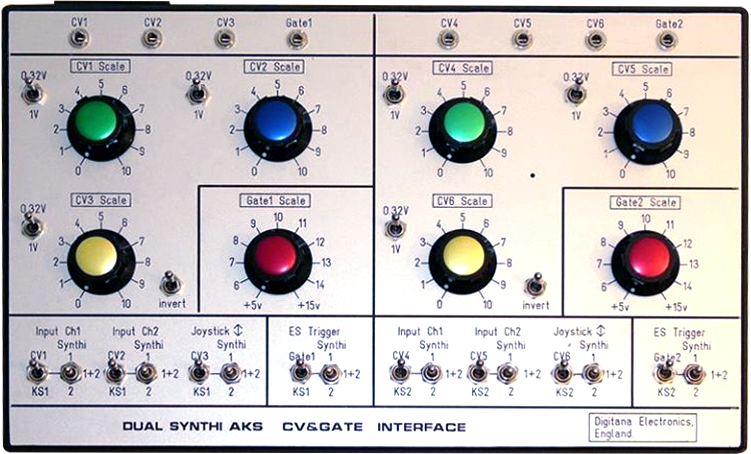 This module is designed for the Synthi AKS and allows a second Synthi (another Synthi AKS or VCS3 Mk1/2) to be simultaneously connected. Connection is via a special 3-way cable each with 8-pin jones connectors attached at the other.

No power is taken from this second Synthi… only the ground connection so that Synthi 1, KS1 and Synthi 2 all have a common ground. The unit has all the functionality of the standard Synthi AKS CV Interface described elsewhere. Either the KS control or three channels of scalable external CV (CV1 to CV3) can be independently switched on each of the input channels (Input Ch1, Input Ch2 and matrix row 16 of the matrix).

With this dual unit, each of the four channels (Input Ch1, input Ch2, row 16 (Joystick vertical control) and ES trigger can be toggle-switched to either control Synthi 1, Synthi 2 or Synthi 1 and 2 simultaneously. The various voltages coming form KS1 on the main Synthi AKS unit (‘Synthi AKS 1’) are all op-amp buffered. This means no voltage drops happen when these voltages are used to drive Synthi 1 and Synthi 2 at the same time, which is particularly important for pitch voltages coming from the KS. In addition there is a voltage inverter available for CV3 as in the single Synthi AKS CV Interface module.

The unit derives its power from Synthi 1 and is minimal (a few milliamps) to drive the quad JFET op-amp used for the three buffers and the inverter. The second Synthi being controlled by this unit can be another Synthi AKS or VCS3 Mk2.

A Synthi A or VCS3 Mk1 can also be used but then you won’t have the CV3 option available to these as matrix row 16 does not double as a CV input on these Mk1 units. There are many creative possibilities when using this unit if you are lucky enough to own two Synthis.

A similar Dual Synthi CV unit is available in Afroromosia wood for people whose main Synthi is a VCS3 Mk2 plus a DK1/2 keyboard, rather than a Synthi AKS, so that it matches the VCS3 styling.