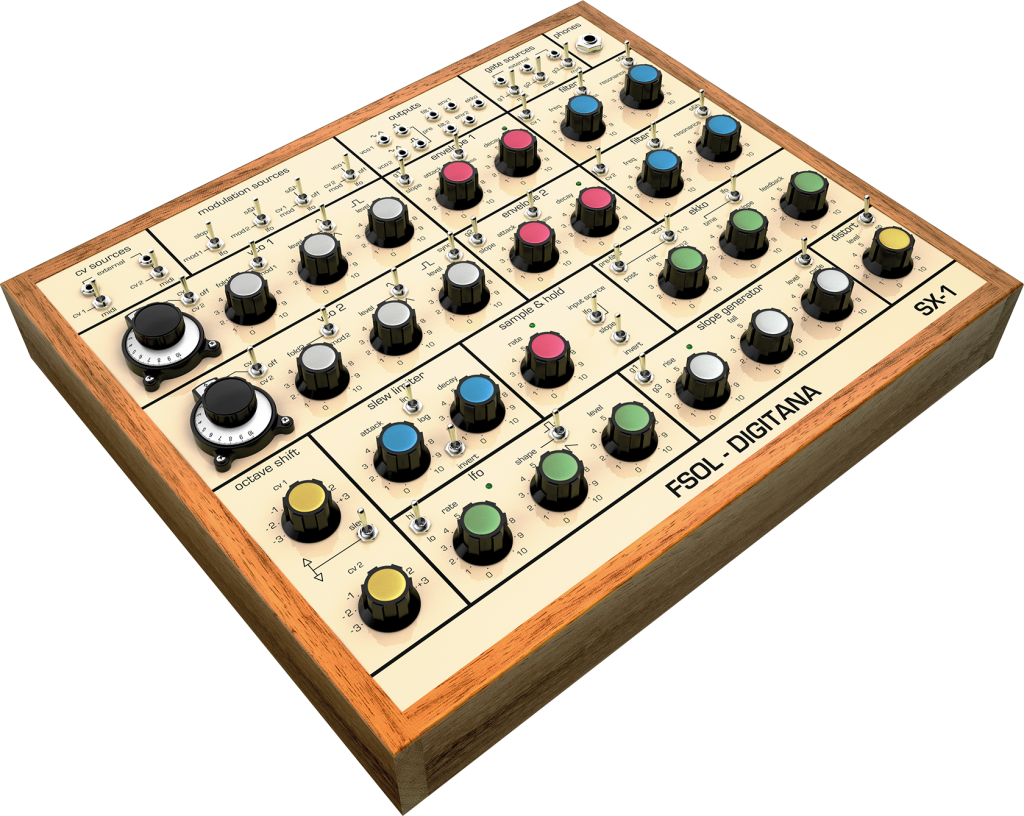 This product is still in development and the final list of features on production units may change.

The SX-1 is a ‘stand alone expander’ based around our Synthi AKS KS Expander (described elsewhere on this website). It is the result of ongoing collaborations between Digitana Electronics and the legendary UK band The Future Sound of London. It shares all the features of the Synthi AKS KS Expander but requires no Synthi to use it (though one can of course be used with it) and in addition has a host of new features described below. 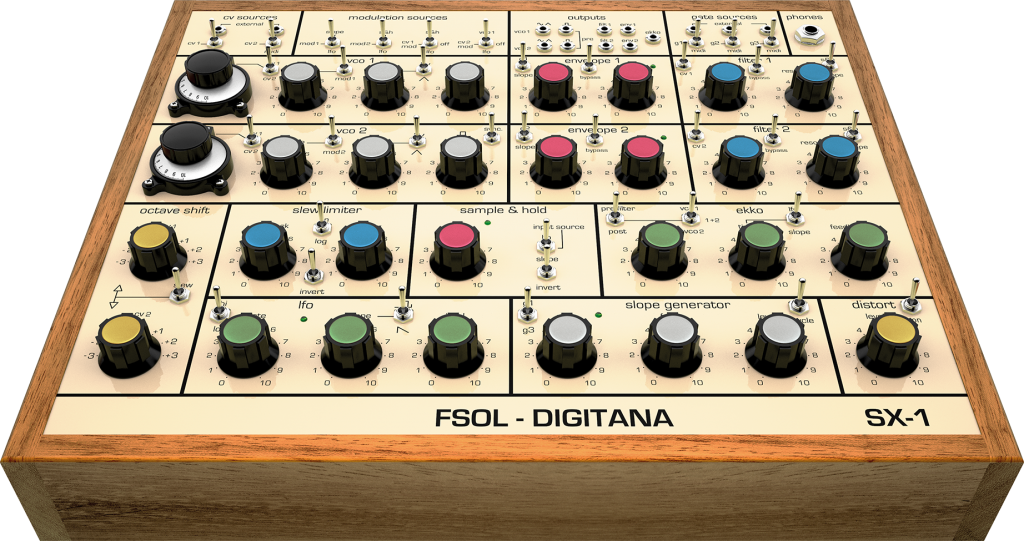 We have decided to add a rear subd 15 way connector to the SX-1 wood case (it is small enough not to spoil the overall look of the design). It will be inset into the wood rather like the current power and midi connections. This will be an expansion/interface point for later modules we plan to make available. This connector will allow external audio inputs to the envelopes, filters and delay/distortion sections and external cv control of filter frequencies, ekko delay time and feedback, lfo out, slope out, s&h out and anything else we can think of that might be interesting for future interfacing to a synthi and/or external modular synths. 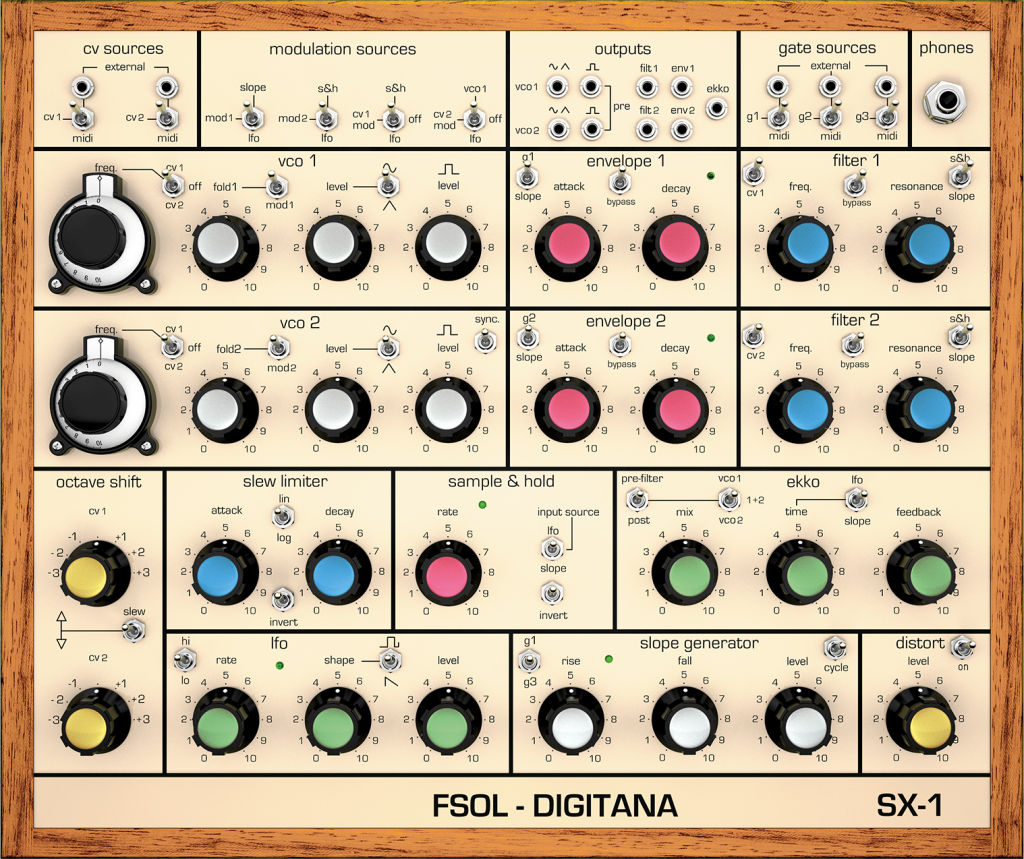 Each VCO features sine/triangle and square waves and 'wave-folding' (voltage controlled) that adds higher harmonics/distortion to each waveform for amazingly rich and varied timbres, even unfiltered! Each VCO is frequency controllable via CV1 or CV2 which can either be external or MIDI generated from the built in MIDI-CV converter or 'free running'. The frequency range of the VCOs is very wide, from LFO to high frequency audio. Two modulating waveforms are available (speed controlled by the Sample & Hold clock or LFO) via toggle switches to modulate the wave-folding of VCO1 and VCO2. These same waveforms are also available to modulate CV1 and CV2. All VCO1 and VCO2 waveforms are individually available either 'pre' or 'post' the filter/envelope/delay/distortion sections via 3.5 mm jacks.

A Slew Limiter (SL) which acts on CV1 and CV2, with separate control over the amount of slewing applied to a rising or falling input voltage ('attack'/'decay') by front panel pots. The slew rate is switchable between linear/logarithmic response. The latter allows for long slew times. Obvious applications of the SL is adding portamento (glide) to a pitch CV. The SL also has an invert toggle switch that inverts as well as slews the input. With attack and decay levels set at zero the SL can also thus act as a standard voltage inverter.

Octave Shift is controlled by two front panel rotary switches, giving octave shifts of plus or minus three octaves, independently on CV1 and CV2.

LF398 based S&H with variable clock (panel LED shows rate). Input source is either from the LFO or the output of the slope generator.

Triggering via gate signals g1 and g2 (which can either be external gates or MIDI generated) or by the output of the slope generator. Bypass options are on each.

Analogue (BBD) delay section with a choice of audio inputs and voltage control of feedback via LFO or slope generator outputs.

Voltage controlled rise/fall envelope source with triggering via gates g1 or g3 (which can either be external gates or MIDI generated). Pot control of rise and fall times and levels. A toggle switch allows the generator to be in either one shot or auto re-cycle mode.

This section can overdrive the audio output of the delay section with added LFO modulation.

Pre-ordering for 1st production run of 25 units is closed.

Please visit the Future Sound of London online shop below for info on possible 2nd run.